Another amazing day of polarizing music from Bang On a Can went down this past Sunday, but I need to get something off my chest first–I did not like the change of venue. It was too intimate. I guess I’m spoiled by the gorgeously expansive Winter Garden at the World Financial Center, but sadly the garden just had to be scheduled for renovation for the planned duration of the marathon, so the Michael Schimmel Center for The Arts at Pace University was chosen for this year’s show. People were saying that this venue had nice acoustics, and suited quieter pieces like Hans Abrahamsen’s Schnee (performed here delicately and briskly by Talea Ensemble; mind you, a very challenging piece for first timers as it’s a hour in length) but there was something intense about heavy artsy culture being plopped into the laps of mainstream New Yorkers that I sort of missed from the WFC shows. 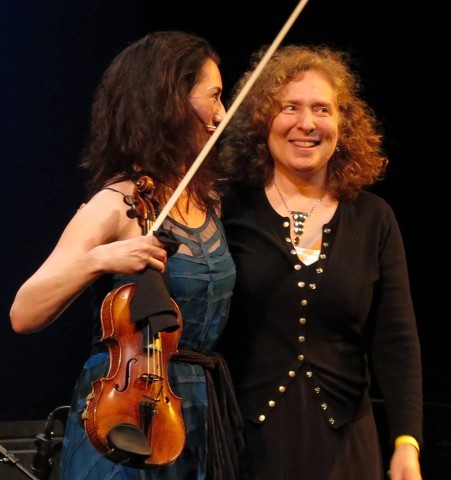 [Monica Germino and Julia Wolfe–Photo courtesy of Tom Steenland]
The show is famous for its diversity, and this year was no exception. The highlights of this show (which, by the way was shorter this year by a couple of hours) were the following:

Performing the US Premiere of Julia Wolfe’s “With a blue dress on”, violinist Monica Germino basically reminded me of something that combines the homegrown primal music of Iva Bittova with the electro-acoustics of Todd Reynolds or Neil Dufallo. An amazing tour de force of progressive fiddling and paraphrasing. 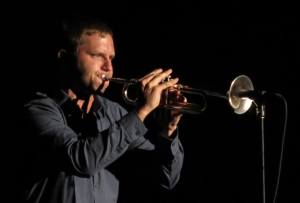 [Peter Evans–Photo courtesy of Tom Steenland]
During Alarm Will Sound’s set, trumpeter Peter Evans delivered the sickest, most abrasive and introspective improvised trumpet solo I have ever heard, the kind that basically makes your hair stand up on your neck. Alarm were wonderful as well–Despite the fact that principal violinist Caleb Burhans had to miss the show because of an accident the day before, his composition “oh ye of little faith… (do you know where your children are?)” was rendered faithfully and powerfully.

A group from Paris, France called Cabaret Contemporain that the All-Stars met on the road, were brought to the marathon for their American premiere, and a couple of fascinating things happened: A) In the midst of one of their jams, which were like electro-acoustic techno meets acid house, bassist Ronan Courty had an accident–the bridge of his bass came right off and was hanging from the strings (it popped rather loudly)–B) But the group kept going as if this was the plan all along, and roughly 5 minutes or so after Ronan unplugged the bass and took it offstage, he re-enters with a completely repaired bass and jumps right back into the improv, again, as if this was the plan. Amazing professionalism! This group, unfortunately, has no CDs yet, but they do have several clips online.

Ex All-Star Maya Beiser was back this year with the Provenance Project Band and performing Tamar Muskal’s “Mar de Leche”. A treat for me to finally see Maya live in person, to hear such an intense blend of eastern music with modern vibrato-driven cello.

Andie Springer, Kathryn Andrews and Domenica Fossati of Hotel Elefant came out and performed Angelica Negron’s “Drawings For Meyoko”. They also had a mishap, this one was more of the electronic variety, but they started over and played flawlessly throughout.

The Bang On a Can All-Stars played not one but 2 new arrangements of older works, the first with composer/singer Shara Worden on David Lang’s “death speaks”, and the second was Michael Gordon’s “Yo, Shakespeare”. Shara, who also had an original piece on the program (“Before The Words”) performed by the Brooklyn Youth Chorus earlier in the show, appeared in a white pantsuit and displayed her rare hybrid of operatic and indie-style singing, in a great combination with the progressive chamber sounds of the All-Stars. The band’s performance of “Yo, Shakespeare” was also a show-stopper, as was Annea Lockwood’s “Vortex”, a piece originally performed by the All-Stars at the 2003 marathon.

But for me, the most memorable performers this year were the Asphalt Orchestra, especially for their wonderfully theatrical entrances. They were just as effective in this venue as they are outdoors or in the middle of the Winter Garden at WFC, and miraculously they had room to run around here even between the stage and the seating. Their performances this year were quite uplifting for me, and when some of the music at Bang On a Can tends to be dark, there is always light when their queue comes up.